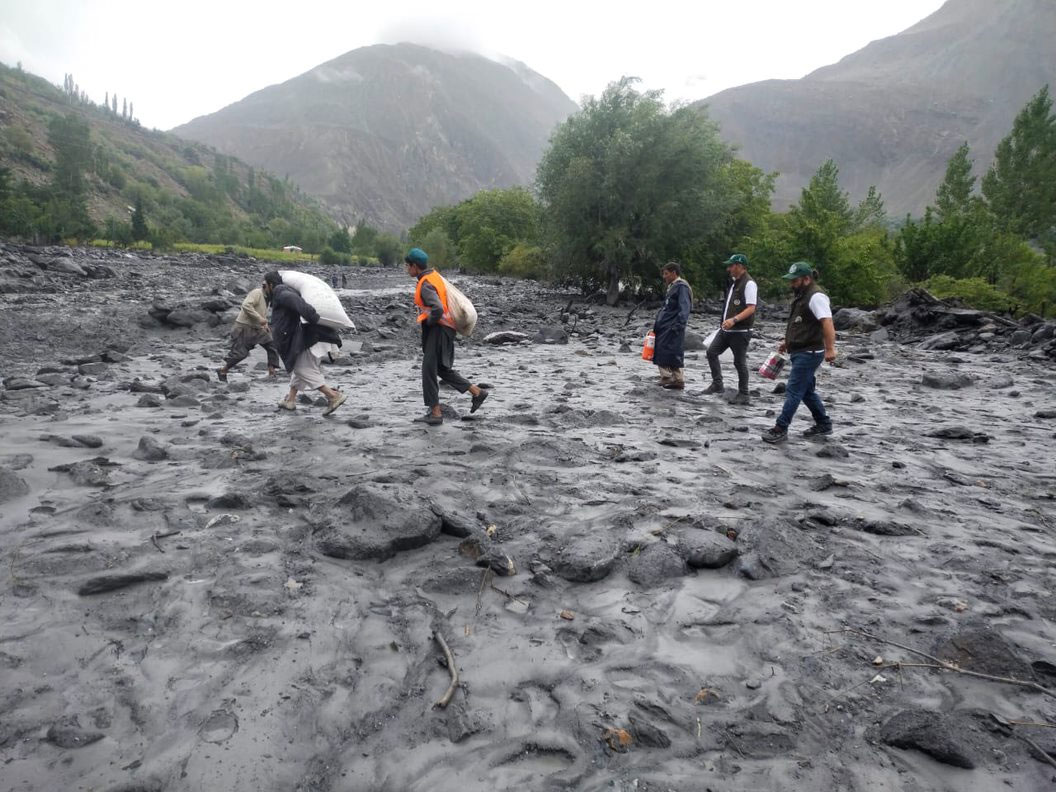 FOCUS and AKAH respond to devastating floods in Pakistan

by Irfan
in Rebuilding Lives and Resettlement, Relief and Recovery
Comments

In response to the flooding emergency in Pakistan, The Aga Khan Agency for Habitat Pakistan (AKAH-P) has provided emergency relief supplies, evacuation and shelter support and technical coordination services with funding support from Focus Humanitarian Assistance.

For nearly three decades, FOCUS and AKAH-P have built capacity to respond to such disasters by training local communities in the following areas – Community Emergency Response Teams (CERTs), Search and Rescue Teams (SARTs), and Disaster Assessment and Response Teams (DARTs).

CERTs in Gilgit and Chitral were mobilised early and safely evacuated more than 8,000 people before floods and landslides reached their villages.

The debris flowing down the mountainsides caused severe damage to homes, businesses, cattle sheds, agricultural lands and trees as well as destroying vital access roads and bridges. Many people are being housed by host families. AKAH and FOCUS have provided food, water, emergency shelter, blankets and essential non-food items to families whose homes were completely or severely damaged. CERTs are continuing to work with local communities to evacuate people at-risk of landslides and to distribute additional relief items from the stockpiles.

Using the AKDN helicopter, several deliveries of food and medicine were made to the most remote villages of Upper and Lower Chitral. This was in collaboration with the Pakistani Army helicopter units who also supported the rescue and evacuation of stranded families. 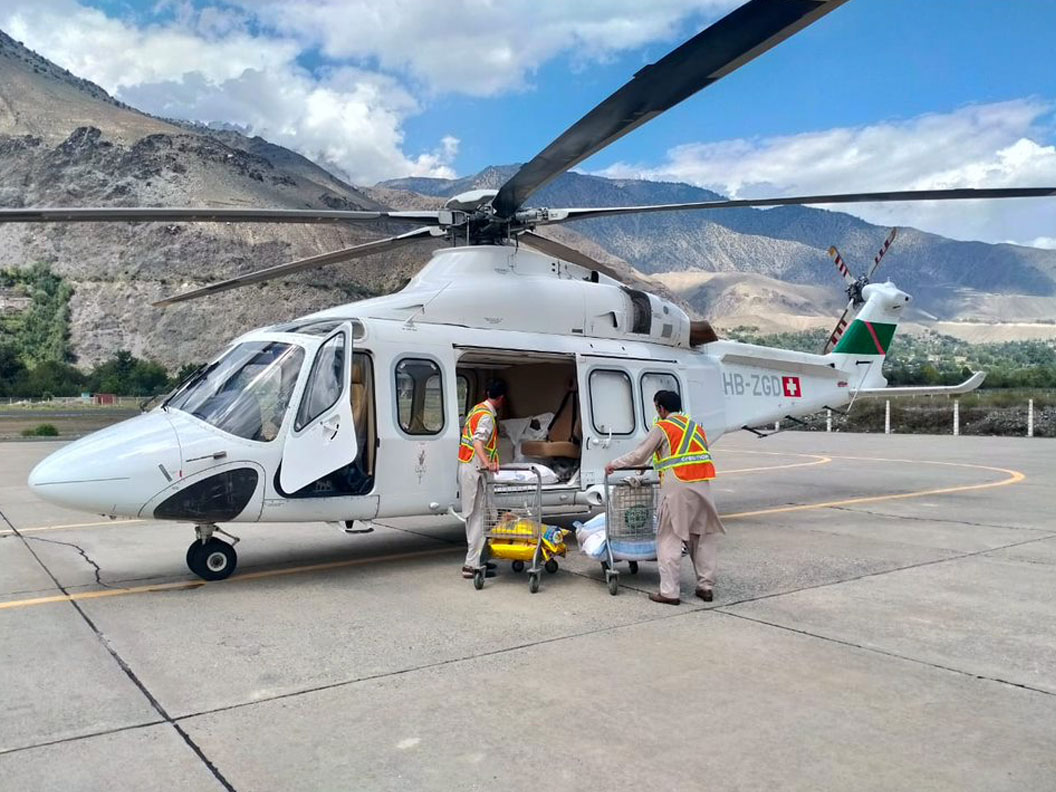 The mountain village of Sherqilla in the Ghizer Valley of Gilgit-Baltistan was one of the worst hit areas. Severe storms triggered flash floods and massive landslides affecting over 250 families in the village. Sadly, seven people lost their lives and two were injured.

In the south of the country, torrential rains caused flooding and widespread damage. The AKAH-P regional office in Karachi prepositioned water pumps at strategic locations and disseminated weather alerts to local communities. CERTs and local volunteers were instrumental in pumping water out of flooded residential and community areas and coordinated relief efforts, working with city municipalities. 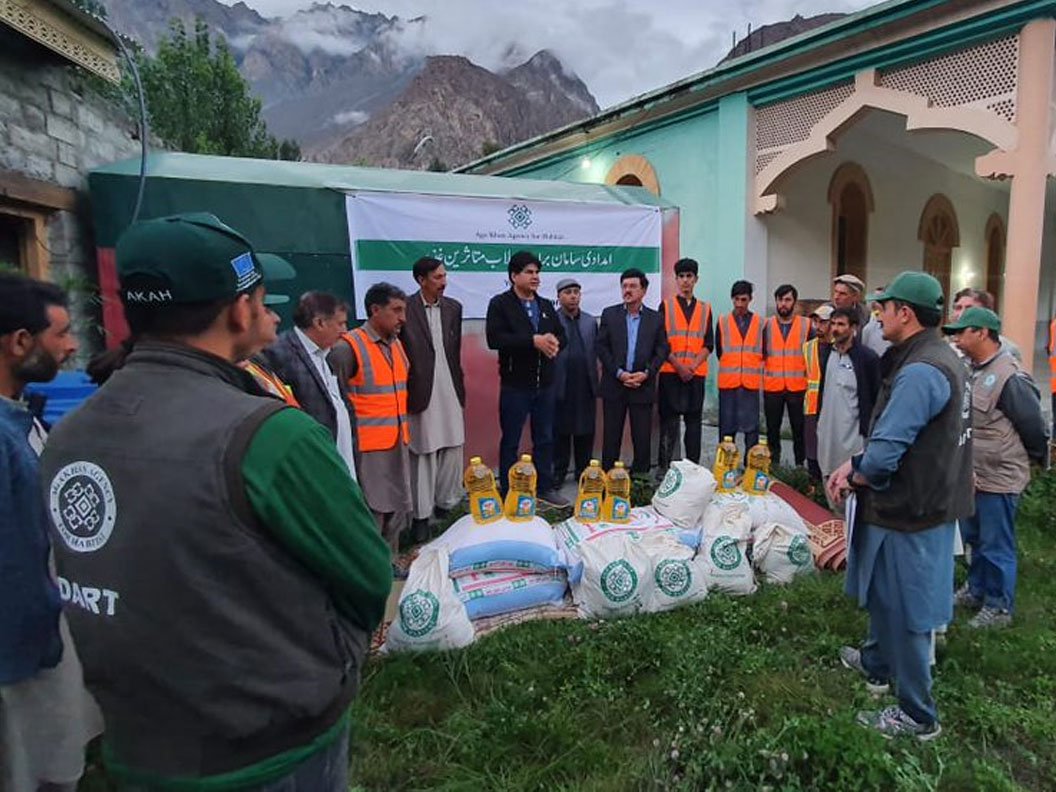 Pakistan’s National Disaster Management Authority has said that floods this summer have killed more than a thousand people and nearly a million homes have been damaged since mid-June. More than 33 million people – one in seven people – have been affected by flooding with more than 50,000 rescued and close to 500,000 now living in relief camps. Many more displaced are believed to be living with relatives, friends, or in makeshift shelters.

FOCUS’s funding assistance to the Aga Khan Agency for Habitat has been instrumental in these humanitarian efforts.

This website uses cookies to improve your experience while you navigate through the website. Out of these, the cookies that are categorized as necessary are stored on your browser as they are essential for the working of basic functionalities of the website. We also use third-party cookies that help us analyze and understand how you use this website. These cookies will be stored in your browser only with your consent. You also have the option to opt-out of these cookies. But opting out of some of these cookies may affect your browsing experience.
Necessary Always Enabled
Necessary cookies are absolutely essential for the website to function properly. This category only includes cookies that ensures basic functionalities and security features of the website. These cookies do not store any personal information.
Non-necessary
Any cookies that may not be particularly necessary for the website to function and is used specifically to collect user personal data via analytics, ads, other embedded contents are termed as non-necessary cookies. It is mandatory to procure user consent prior to running these cookies on your website.
SAVE & ACCEPT